Possibly the cutest cat picture ever!

I know that not everyone loves cats as much as I do, but I defy even the most ardent anti-cat person not to fall in love with these two gorgeous felines!

I’m updating this with some more cats for 2010 – this time a picture of my mother’s kittens, Bobby and Benjy, relaxing at home in a much more appropriate setting than a sink! 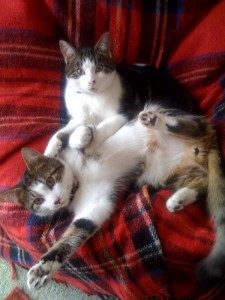 Benjy and Bobby relaxing on the rug!

I’m delighted to hear that the BBC have confirmed that Merlin will be coming back for a fourth series – great news!

This is by far my favourite TV programme of recent times and I can’t wait for its return.

Filming started a few weeks ago, based at locations in Wales and France apparently, and here is a picture of Bradley James, who plays Prince Arthur, with a copy of the script. It must be good because he looks delighted!

Dune: still one of my favourite films!

In my opinion, Frank Herbert’s Dune is the finest science fiction story ever written, and certainly the most important.

Although the film never quite captures the magic of the original book, the beauty of the sets (and the cast), the brooding performance by Kyle Maclachlan and the sheer scale of David Lynch’s vision make this one of my all-time favourites.

If you’re a science fiction buff and you haven’t seen this, watch it now!

MARCH 20, 2011 No matter how many times I watch this, it doesn’t get any less funny – this is absolute comedy genius and definitely the best Comic Relief sketch ever! It will make you cry with laughter! Enjoy.

What a breathtaking start to what should be Jack’s last day!

He *really* doesn’t want to be there, but we’re glad that he is as this season surpasses even the last, making it the best so far. When he says “I hate this place!” we don’t doubt that he means it, but we also know that he cannot turn his back on his country.

As always, the action is matched by the depth of the character analysis; the impact of the previous events on some of the key players is clear:

Chloe’s confidence is shot to pieces and we’re left wondering if she could even put together a PowerPoint presentation, let alone decrypt data in time to save the world…

President Taylor seems to have had her moral compass re-calibrated as a result of the destruction of her family in ‘Season 7’, but is she a better leader for it as result?

CTU’s budgets have clearly gone through the roof, but they seem to have spent all the money on new technology and flashy gadgets at the expense of good personnel.

Of one thing we can be certain – even if Jack doesn’t make it to the end of this day, his return to our screens is welcome – and scintillating.

“24” remains TV’s pièce de résistance, and seems better than ever for those who can keep up with the pace!

Some Monday morning humour to make you smile: 11 January 2010

A man and a friend are playing golf one day at their local golf course. One of the guys is about to chip onto the green when he sees a long funeral procession on the road next to the course. He stops in mid-swing, takes off his golf cap, closes his eyes, and bows down in prayer.

His friend says: “Wow, that is the most thoughtful and touching thing I have ever seen. You truly are a kind man.”