Is Humanity really any more civilized today than 1000 years ago?

When I hear religious group A say that all of religious group B are bad, and then religious group B in return say that all of religious group A is evil, it is a reminder that despite smelling better, living longer better and having more shiny things, humanity really hasn’t come that far since the Dark Ages. Today, millions of people are displaced on every continent – struggles in Syria, Ukraine, Thailand and all over Africa only help to underline the extent of human suffering caused by other humans. Something must be done to take humanity to a new level of understanding where one group identifying another as their enemy and rationalizing their oppression as somehow justified based on moral or economic measures is not acceptable. Here’s hoping for peace and goodwill for all of humanity.

Seeing NYC’s recovery from 9/11 has moved me!

After my meeting this morning in Wall Street, I spent a couple of hours in the World Trade Center area, visiting the 9/11 Memorial Center where there are some incredibly powerful recordings, photos and artifacts from that fateful day in 2001.

I think that what happened then in NYC, and the determined response from New Yorkers serves a potent symbol of the failure of terrorism and extremist ideologies.

Despite the tragic loss of life, and the scars left on this truly great city, New York was not defeated that day; the attack seems only to have made the people of New York stronger…

I can feel the defiance in air, sense it in the swagger of the people and see it in the proud, strident architecture of the new buildings that are rising gracefully in the place of the Twin Towers.

Today I was reminded why I’m an Arsenal fan…

I was reminded why I have sat in the wind, rain and snow losing my voice through screaming at players who cannot hear me – and rejoicing in their genius when not despairing of their failings.

I was reminded why I’m proud to wear the crest, even when we crumble under the brilliance of our competitors and the brutality of poor refereeing.

I was reminded what it means to face down adversity and to look deep into ones soul to find the resolve the carry on, only to prevail at the last minute when belief is tested beyond hope.

I was reminded that North London is red, has always been red and will always be red. 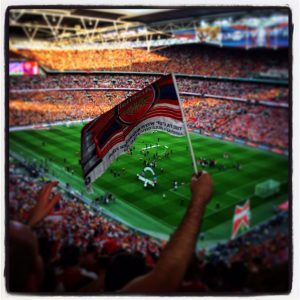 I’m sorry, but credit where credit is due; they have maintained a high standard of services whilst their budget was reduced by nearly 30% – in fact, resident satisfaction has gone up and no frontline services have been cut despite the budget reduction.

If praising that kind of performance is wrong because I’m a Tory and we’re meant to only bash the Public Sector, then I’m happy to be wrong all day long.

The fact that we have public servants who are prepared to do twice the work for half the money that they could get in the private sector is one of the things that makes this country great; we should be proud of that whichever side of the political divide we are from.

Every day, we read about another weather event that is endangering life, whether it is Superstorm Sandy that affected the Caribbean and American East Coast, the Bangladesh floods of the summer of 2012, the unprecedented floods and high tides currently affecting the United Kingdom, or the incredibly high water levels in Venice that threaten to finally plunge it under the sea.

In 2012 we have seen extreme weather events affecting every part of the world, but yet still the great nations of Earth continue to spend their money on fighting wars and military campaigns rather than investing their resources in the one war that is certain to take an increasing number of human lives in the coming years: the war against Climate Change.

In the UK, we have gone from the worst drought in living memory to some of the heaviest rain and worst flooding since records began; whether or not you believe that humans are responsible for it, there is no doubt that we are experiencing an unprecedented level of weather-related disaster.

For those who don’t believe that this is the case, there are some interesting statistics regarding the significant increase the number of weather-related disasters affecting the USA:

This graph show that both the number and the scale of weather-related disasters has steadily increased over the last 30 years, and so even if we are not responsible for these changes, surely we should be doing everything that we can to protect ourselves from them?

Instead, we continue to fight futile wars based on weak ideological arguments, when we really should be investing in protecting against climate change.

These billions are spent to ‘protect’ our nations, but at the same time these governments are doing very little to protect against climate change – why not?

Some experts suggest that we are rapidly approaching the tipping point past which it will not be possible to prevent a forecast rise in the average temperature on the planet and the melting of the ice caps.

If we don’t do anything about it, there is every possibility that instead of other nations and terrorists, the greatest threat to our continued existence as nations and as a species will be climate change.

Surely the next world war should be one against climate change, and not each other?

I have a confession to make.

I should be embarrassed to have to make this confession, but I’m not, because this has been an important realisation for me…

I’ve finally learned, after forty years, that the characteristic that I value the most – and find most attractive – in the opposite sex, is intelligence.

I don’t really care how long a lady’s legs are, or what her waist size is – what turns me on these days is intellect and intelligence.

Arguably, I should have known this many years ago, but I think that men are conditioned by media and society to value women mainly at a superficial level and it takes some maturity and self-analysis for a man to understand that.

It is just a coincidence that lots of the women that I am close to are beautiful; in reality it is their intelligence that makes them special to me and if I had realised this many years ago, I think that I would have made me a better person.

Thanks for reading. Feel free to flame me, because I probably deserve it.

Today, join me in thanking Eric Montgomery & William Burgamy for their proud service in the U.S. Marines and Navy! 🇺🇸

Your talent, can-do attitudes, and teamwork ethic are what makes our @TMobile Digital team so special.

Businesses shouldn't have to pay more for a service just because they're businesses! And with America's only nationwide business broadband provider - they won't!