I’ve finally decided to come out and admit the truth.

For years I have struggled with an important personal issue that many of my family and friends have speculated about, and recent developments have convinced me that now is the time to come clean and finally admit it…

Ever since I was a child, I’ve had an unusual relationship with meat…

My mother often complained that the only meat I would eat was sausages or chicken breast – I’ve always found chicken wings and legs pretty distasteful, and the occasional KFC Chicken Burger was probably the only time that I ever enjoyed eating ‘chicken’.

My mother often had to ‘finish’ any chicken legs or wings that I found myself having to eat – and she would happily strip them down the bone while I watched in disgust wondering how anyone could enjoy chewing what had so obviously been part of a dead animal.

I always shunned fish too – with the exception of Fish Fingers or Prawn Cocktails – and often had quite a strong negative reaction even to the smell of fish.

I have struggled with this, though; my parents come from Jamaica, and an important part of Jamaican culture is the curried and spicy food, often based on curious pieces of meat like Oxtail and Goat and which I have always point-blank refused to try. 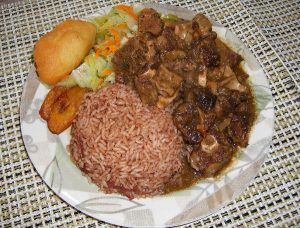 It has always been a source of friction, with my mother in particular wondering if it was a rejection of my Jamaican ‘roots’, whereas in reality it was more about me just not liking meat.

As I got older and no longer had to worry about pleasing others, I found that I was naturally avoiding meat; I never, ever bought meat (apart from one or two special dinners where I was buying it to be cooked immediately – and always thought hard about where it came from) and have always found the sight of raw meat unpleasant.

That said, I did enjoy frozen processed chicken such as ‘Crispy Chicken’ and ‘Southern Fried Chicken’, but a couple of years ago realised that I had stopped buying those too.

(Confession: Strangely, over the years I have enjoyed the occasional steak, but only when in a restaurant and I would never dream of cooking one myself).

The recent scandal regarding horse-meat in the British food chain doesn’t surprise me, and when the stories about it broke, I actually felt quietly smug not to have been affected due to not eating the sort of cheap meat under suspicion.

Recently, however, when discussing the fact that I hadn’t eaten meat for nearly two months, a friend showed me this video about the meat industry in America and it was the final push that I needed to ditch meat entirely – and formally:

The appalling cruelty with which the animals that end up on our tables are treated, together with the fact that I can no longer stomach meat makes it easy for me to finally accept the reality – I’m just not a carnivore.

So here I am. I’m a Vegetarian, and I’m no longer afraid to say so.

I’m not weird and I’m not an environmentalist – I just don’t think that eating dead things is healthy, especially considering how little we know about where much of it comes from.

I don’t care what anyone else eats, and I don’t want anyone to be inconvenienced by my personal choice, but I’m delighted that I’m finally liberated to accept the reality!