Why British people are so obsessed with the weather!

I’m often asked by friends from all around the world why British people are so obsessed with the weather?!

The truth is, our weather in the UK is actually pretty good; it’s temperate, we don’t have the extremes of hot and cold that many other countries experience, but people still describe our weather as ‘terrible’.

Let’s use London as an example…

On average, London has weather comparable with New York – London being slightly cooler in summer and slightly warmer in winter, with less snow.

So why do people think that the weather is so much worse, and why do we talk about it all of the time?

The reason, I believe, is the unpredictability of the UK’s weather – it’s entirely possible for the weather to change from one day to the next in a way that just doesn’t happen in other cities. 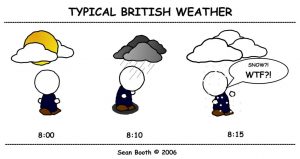 Britain is unique in that it is a small land mass in the Atlantic Ocean buffeted by a number of global weather systems and their tributaries: 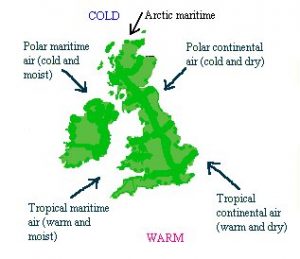 This complicated system translates to a constant battle between warm and cold weather fronts in the atmosphere above the UK that prevents extremes (it’s rarely very cold and rarely very hot), but also means that the weather can vary enormously from day to day.

(It also explains why the north of the UK tends to be colder and wetter, whilst the south warmer and drier.)

More importantly it means that, depending on where you are in the country, the weather can switch dramatically from one hour to the next.

In London, I have experienced a day where there was a glorious bright sunny morning, followed by a drizzly afternoon and then snow in the evening.

There are not many cities where this could happen, and this helps to explain why British people think about and talk about the weather so much.

I think that climate change is having a profound effect on this too, in that the Gulf Stream and other components of our weather are changing in their complexity and scale, which further exacerbates the problem.

The summer of 2012 was just confirmed as our weirdest on record, and there is no reason to believe that this summer will be any less ‘exciting’:

I think that we’re now approaching a period where the level of unpredictability is getting greater than ever, and we could be living in a time where we simply will not be able the predict the weather for more than a few days ahead.

This is not necessarily bad – Britain’s obsession with the weather led to the invention of most of the equipment and technology used in meteorology too.

Whereas my Muscovite friends can happily go about their lives in the knowledge that it will be hot in summer (over 20 degrees) and cold in winter (below -5 degrees), we can’t, and I think that this is why British people are so obsessed with the weather!

Is it a problem? No! We just need to keep calm and carry on 😉